A rhino was notched in the thick bush

Just before Christmas, two loyal returning guests of Rhulani Safari Lodge made a valuable contribution to the protection of rhinos. They notched a big white rhino, which turned into an unforgettable experience. We thank John and Suzie for the great support. Here is the story told by John of an exciting day. 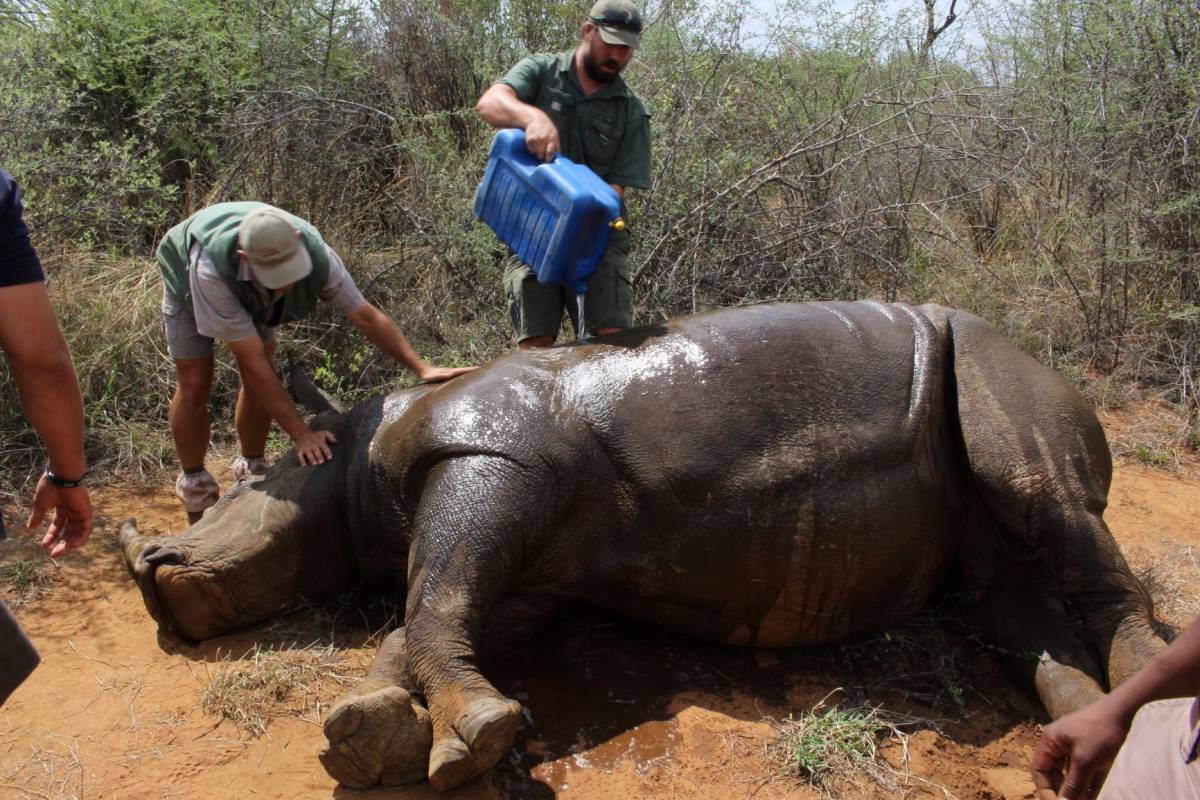 Water dousing ... it was a hot day 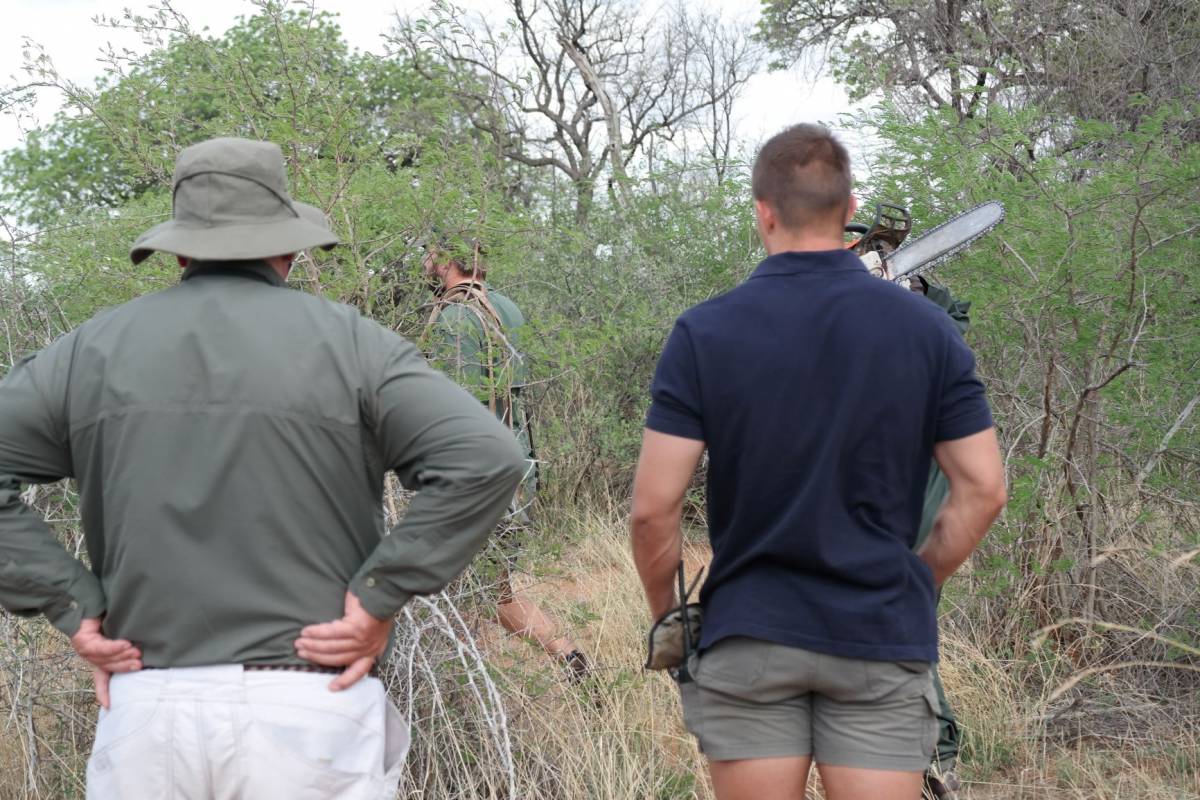 Through the nush ... where is the Rhino? 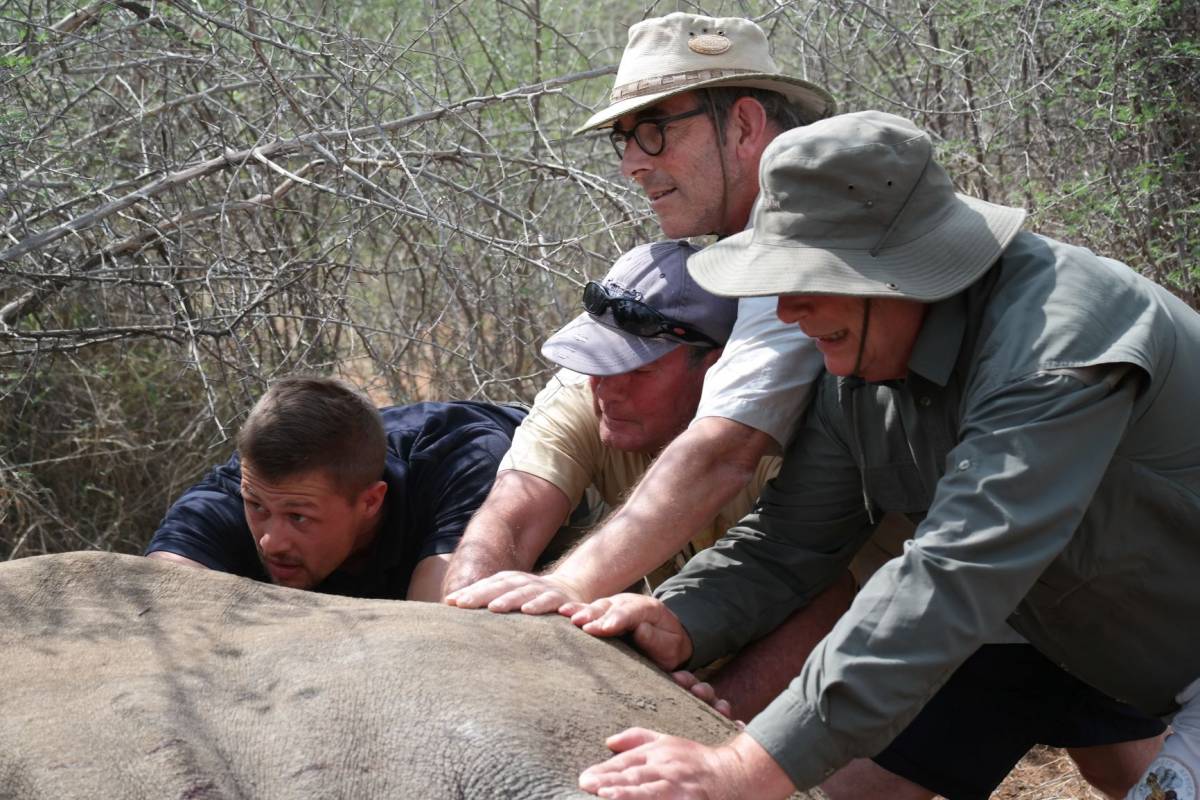 It was the 21st December 2018 we had been advised that due to the hot weather that Madikwe was experiencing we would need to be at the Purple Rain gate by 6 am latest else the Vet may call off the Rhino Notching as it may be too hot for the Rhino to be immobilised for so long.

After a 3 am wake up all we were ready to set us at 4 am giving us enough time to reach the gate by 6 am. Even though the day time temperatures were high up above 34 degrees at 4 am it can be quite chilly in the game viewing vehicles. We however survived the almost 2 hour journey to Purple Rain begging for the sun to come up and give us the warmth we needed.

On arriving at Purple Rain we called the appropriate number and got the Gate code. We drove up the steep slope and were met by Sam the Ecologist at Purple Rain. She accompanied us to the area where we would begin searching for the Rhino Cow she particularly wanted to notch. This Cow had already been notched some years before but no DNA samples had been taken and as this is now obligatory for reserves that keep Rhino she wanted to get this ones DNA. The helicopter pilot and co-pilot were already there accompanied by the Vet David and Sam’s husband ‘Lamy’ plus the Rhino Security team from Purple Rain. Hot Coffee and Chocolate with some biscuits and Rusks were offered to all, of course some Amarula crept into the Rhulani guests beverages.

As Rhulani had managed to secure the larger helicopter we were able to have all our family and friends take turns up in the sky. The first couple went up with Sam and the Pilot JP. They searched and searched for the Cow she wanted to notch. After finding one they thought was her they decided to double check the old notches. It turned out not to be the one. After 30 minutes they returned to ‘Base’. I then went up with my nephew. It was very windy and after another 20 minutes we still couldn’t find the Rhino or indeed any Rhino. Sam is not so keen on flying so we landed and let the Vet and her husband take over. After about 20 minutes we got a Radio call that they had found a Rhino. Not the exact one she wanted but Plan B.

We all jumped into the vehicles, I accompanied Sam. She was busy cuddling the little woollen Rhino I had presented to her earlier (now called Sheila) as the call came in.

It was quite a long way to the place where they had managed to dart the Rhino and it took about 15 minutes to get there. So the poor Rhino had been under for about 30 minutes. Lamy came to the sand road where we had stopped and we followed him into the bush with first aid kit, chain saw, water and all the Rhino security staff. After a very ‘scratchy’ 10 minute walk through relatively thick bush search we found the Vet and the Rhino.

Unlike the Rhino Notching’s that I have previously been on this Rhino went down in relatively thick bush not ‘dropped at your feet’ like the other ones I had partaken in. So the first job was to right her and cut away thick thorn bushes from around her back and rear end so we could comfortably work on her. David the Vet after monitoring here breathing and heart rate gave us the all clear to begin work on her. We had all been very well briefed during the coffee break as what needed to be done. I and my nephew were given Vitamins and anti-biotics to inject into her buttocks, others were taking blood, tail hair and nail clippings. Holes were drilled in her horn ready to receive the tiny coded microchip which is then glued into place. Another placed behind her ear and the horn drillings are also collected and placed in the DNA kit bag. David re cut one of the notches as it had over the years become almost unreadable.

As she had been down now for around 40 minutes, we dowsed her in water and excised her legs to get good blood circulation going again.

After a quick check that everything had been collected and correctly placed in the DNA kit bag, everyone was asked to return to their respective vehicles. I the Vet and Lamy stayed behind and I was given the honour of injecting the antidote which would get her mobile again. During the DNA collection she had been blind folded and her ears plugged. This is normal as she is only demobilized not put to sleep. After removing the blindfold and ear plugs I carefully injected the antidote. The three of us took about ten paces back to watch if she would start moving. Within 30 seconds she was already moving her hind legs so we retreated another 20 paces watched her get up on all fours and then we exited stage left pretty sharply.

After finding the vehicles again we then drove back to the Botanic gardens in the middle of Purple Rain and were served a most delightful Bruch which after all our efforts was thoroughly enjoyed by all. Photographs of Trees and Birds were taken by our Ladies and then we began the long drive back to Rhulani. This time we were not as lucky as last time when we saw all the Big Five on the way home. Only a couple of Lions and a nice herd of Elephants. However after only being in Rhulani two days we could tick off all the Big Five only missing the Magnificent Seven by the Cheetahs and Wild Dogs, this we hope to rectify in February 2019.

The Rhino was officially named Suzie.