Rhulani saves the trunk of a baby elephant

It was a very urgent conservation activity sponsored by Rhulani. A baby elephant was found in the reserve with a plastic piece around its trunk, which the little animal had picked up somewhere and which had to be removed. The operation went very quick and without any friction. Now, the baby is happy again and joined its mother right after the intervention.

"When animals are injured we usually don’t do anything and leave them to the laws of nature," tells us Declan Hofmeyr, Operations Manager in Madikwe. "But in this particular case, where the injury is caused by humans, we decided to intervene."

In the midst of a large herd of elephants, in the north of Madikwe, a small baby elephant was carrying a white plastic ring around the trunk. "Right now, this was not a big problem," says Izzy Szott, a German intern, who is engaged with elephant conservation in the reserve. "But you could see how the ring was already cut in the trunk and starting to hurt. This would have led to big problems aloing with the animal’s growth", tells us Izzy.

The call for help also reached Rhulani. "We made funds available immediately", says Rolf Steiner, Rhulani's owner. "Conservation is one of the reasons why we invest in such a business."

Three days later, on Monday 11 April, we met early morning at the Eastern Airstrip. This is about an hour's drive away from Rhulani, but it was where we expected to find the injured elephant. Izzy says: "I spent the whole weekend with the herd to be sure that we will find it quickly today." 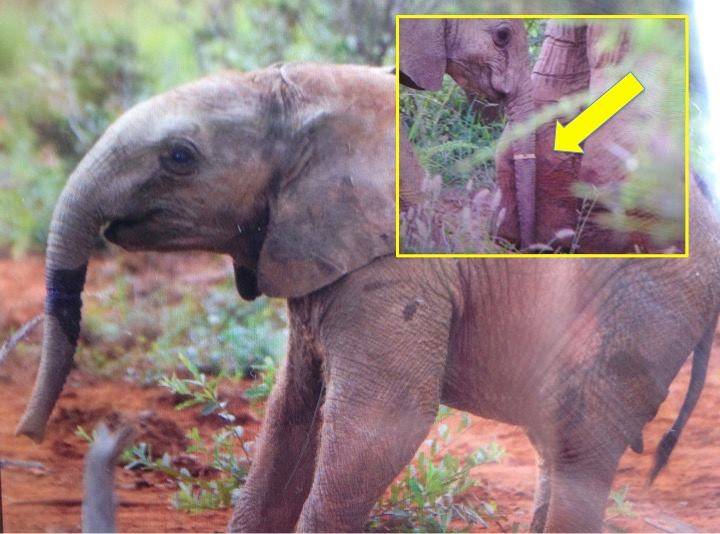 The helicopter took off 7:30 am and spotted the herd immediately from the air. For the veterinarian it was not difficult to identify the injured baby elephant and dart it with an accurate shot. "It is still very young, so the big question for us was how to keep the mother away when the calf was lying in the grass", says Izzy. Thanks to excellent helicopter flying skills, the herd was moved away a few hundred meters. So, there was no need to dart the mother. She was finally at safe distance.

Then the operation had to proceed very fast. "There were also lions right next to us," says Gerda Kubirske, Rhulani's manager. The plastic ring was removed, and the wound was washed. "It was a part of a plastic pipe", says Izzy. “The baby had probably found an underground pipe when gigging for water in the ground. Somehow a part of it got around its trunk. Very bad luck!”

A little later, the baby woke up., staggered on its legs for a moment, but then curiously started to inspected our vehicles, which stood nearby. Izzy stayed with this young animal until it reunited with the herd and found its mother again. Izzy looks back on a successful day: "Now everything is back in order. We have probably not only saved its trunk, but also its life".

According to the veterinarian, the trunk will carry no permanent damage. Maybe there will remain a kind of tattoo forever that remembers this intervention.