For our recent guests Marco Strimer and his wife Sabine from Switzerland, the stay was an unforgettable experience. In addition to the usual safari program, a "rhino notching" was organised, which is an important conservation work to protect the rhinos. We thank John Pickering and his wife Suzie for their support and for making this interview with Marco. 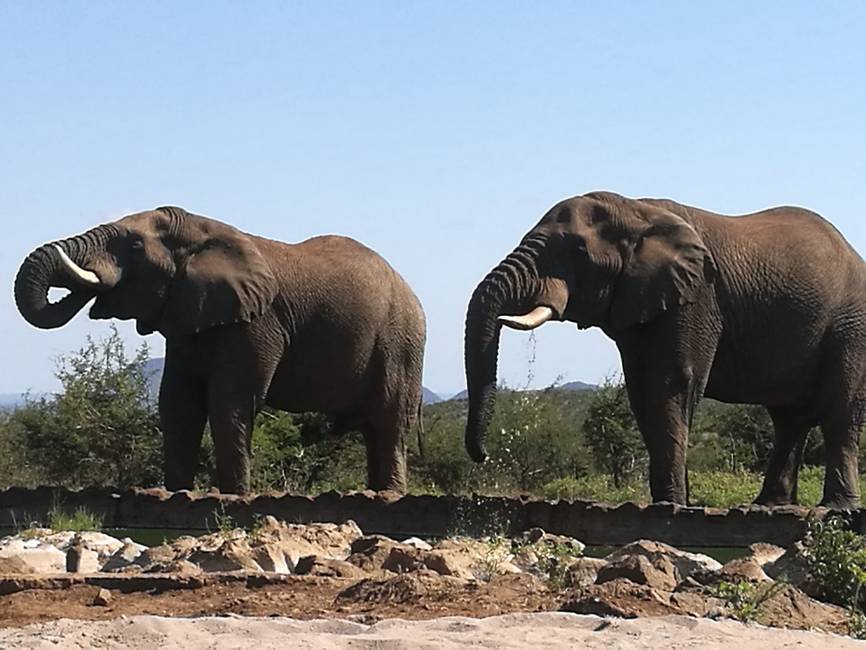 Elephants were seen so close from Rhulani's new hide 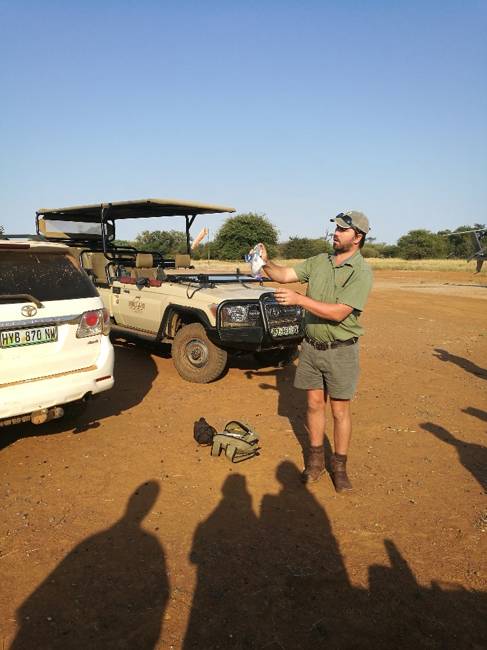 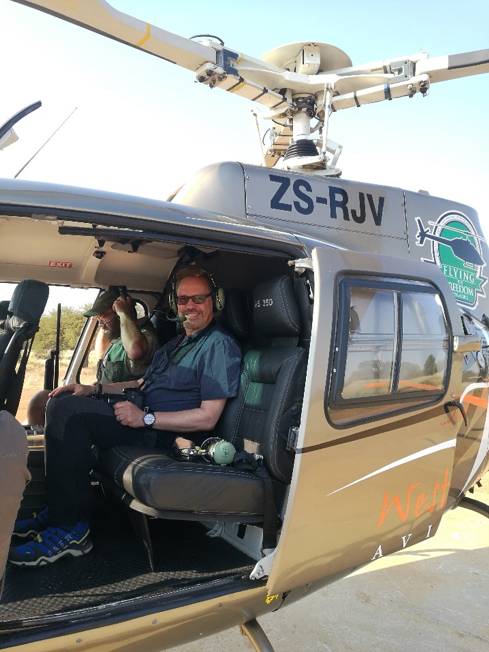 All of a sudden, I was sitting in the helicopter and the engine started. 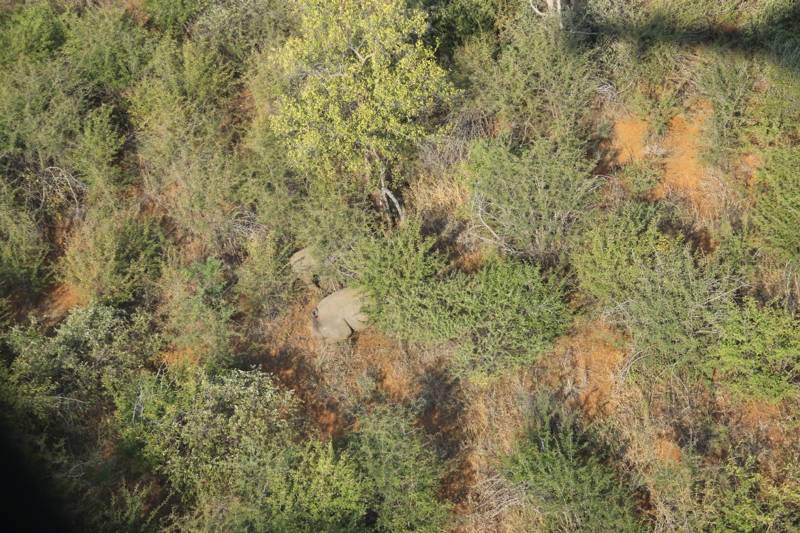 Spotting such a large animal from the air is not as easy as you would think. 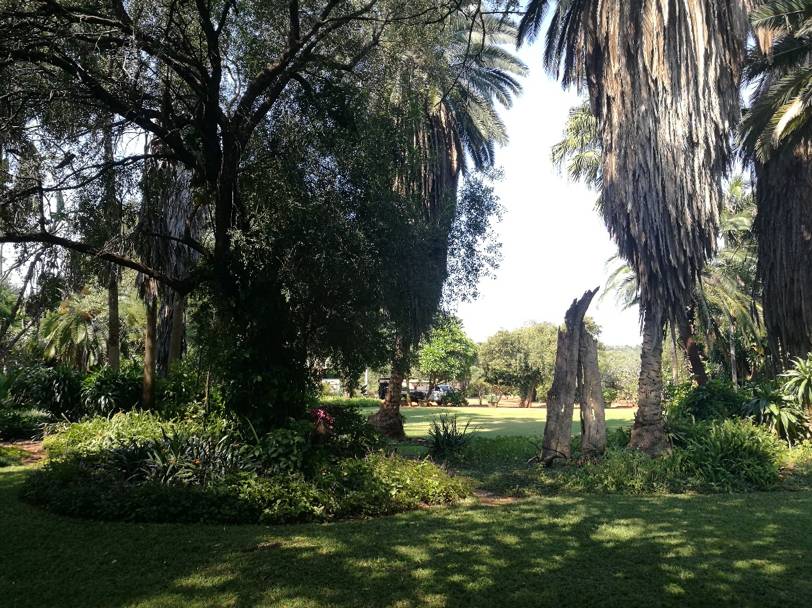 The gardens at Purple Rain

How did you choose Rhulani?

Marco Strimer: My friends Suzie and John chose Rhulani for us. I know these friends from when they still lived and worked in Switzerland. Because we always had a good time together I completely trusted them with the choice of the Lodge. By that time I did not know that both of them had been at Rhulani several times before. Of course, we looked at Rhulani’s webpage, but, what we experienced in the Lodge was just extraordinarily in all respects. We went to see the new bird hide, that will be completed soon – and – saw elephants so close as you would not see them in the zoo.

When did you hear about Rhulani’s animal conservation activities?

Marco Strimer: This was a very special occasion. We were on our very first Safari ride somewhere in the bush having Sundowners when John surprised me that we were going to a Rhino notching in Purple Rain. I did not really know what this meant and John explained that it was important for the conservation of these animals so that they can be traced should they ever be poached thus allowing a prosecution of the perpetrators. Hence, there is a law that the notching of endangered species such as Rhinos is mandatory.

How did Rhulani organize this activity and how welcome did you feel before the Rhino notching?

Marco Strimer: Rolf, the owner of Rhulani organized the notching with his friend Sam the Ecologist from Purple Rain. Alasdair, our field guide, drove us there where we met with charming Sam and her husband Lamby. They took us to their viewing platform directly at the river where we were entertained with a wonderful sunset. It was fantastic. After this we had a wonderful barbeque in the open space at their spectacular Guest House. After some excellent South African Wine and Gin we went to bed – excited about the experience awaiting us and ready for the big day tomorrow.

Obviously you had never heard of Rhino notching before so what did you learn from the briefing?

Marco Strimer: Sam and Lamby have informed us that the Rhino they had identified for notching was still in the area so the notching going to take place. When we came to the scene I was impressed about the amount of people. Everyone was there, the vet Ian  the helicopter pilot, J-P, Sam, Lamby, Caren, Brad and a lot of people that assisted the notching. Sam and Lamby gave us a very detailed briefing starting with why the notching is so important and clarified the operational aspects.  Ian explained in detail what would happen to the animal and especially that the health of the animal was more important during the whole operation than anything else.

How was that experience?

Marco Strimer: Then, all of a sudden, I was sitting in the helicopter and the engine started. We flew over the bush and were looking for the designated Rhino. It took quite a long time until we found a Rhino cow and her calf. For Sam it was clear from the beginning that this was not Rhino she had as plan A, but this Rhino also needed notching. So we herded the Rhino towards an open area – and – at some point the doctor darted the Rhino. It took about 15 minutes until the Rhino became incapacitated. It was quite a challenge to separate the mother and the calf but eventually the pilot, JP, succeeded.

We landed and ran to the Rhino. By this time the staff had already begun with their work. They drilled two holes into the horn in order place microchips in them. Other staff were taking blood and taking some hair from the tail and the vet cut of a little piece of the Rhino’s ears (notching). It was a fantastic experience to feel and see an animal that close and after around 20 minutes all the work was done. We congratulated each other for the successful notching. The Rhino was named Sabine, the name of my wife, its DNA and other information is now in a Central reference database.

And what happened then?

Marco Strimer: Thereafter, we went for an outstanding breakfast to Purple Rain, where Debbie and Dave spoilt us with English breakfast and everything you can imagine. The gardens of Purple Rain are amazing. It was very pleasant that Sam joined us as well, together with some staff. They debated what they will do next and you could feel their heart is with the animals. Impressive.

Would you come again?

Marco Strimer: Definitively, we were spoilt in all aspects and I always felt as part of a great big family. I can only recommend Rhulani and a conservation activity (availability and price need to be specially requested from Rhulani).

You can trust the Rhulani Team – they do a fantastic job and you will not regret any minute of your stay – but you will regret not going there.

Personally, this is an experience that I shall never forget. The notching was an absolute surprise I am very thankful to John, Suzie and Rolf for organizing this. 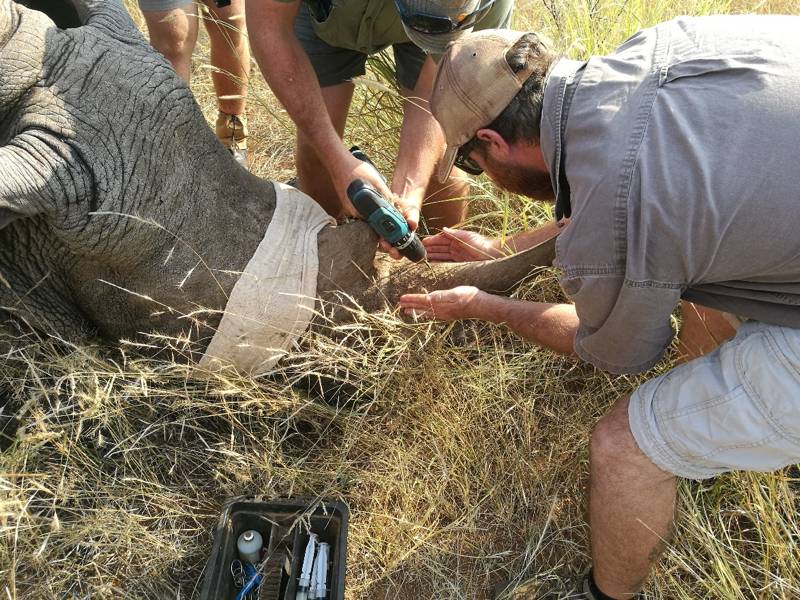 During the notching activity: Taking of various measurements