Rhulani's guests were actively involved in an important conservation activity of the Madikwe Game Reserve. A defective collar was successfully removed from a male cheetah.

Watch the video from an exciting conservation activity 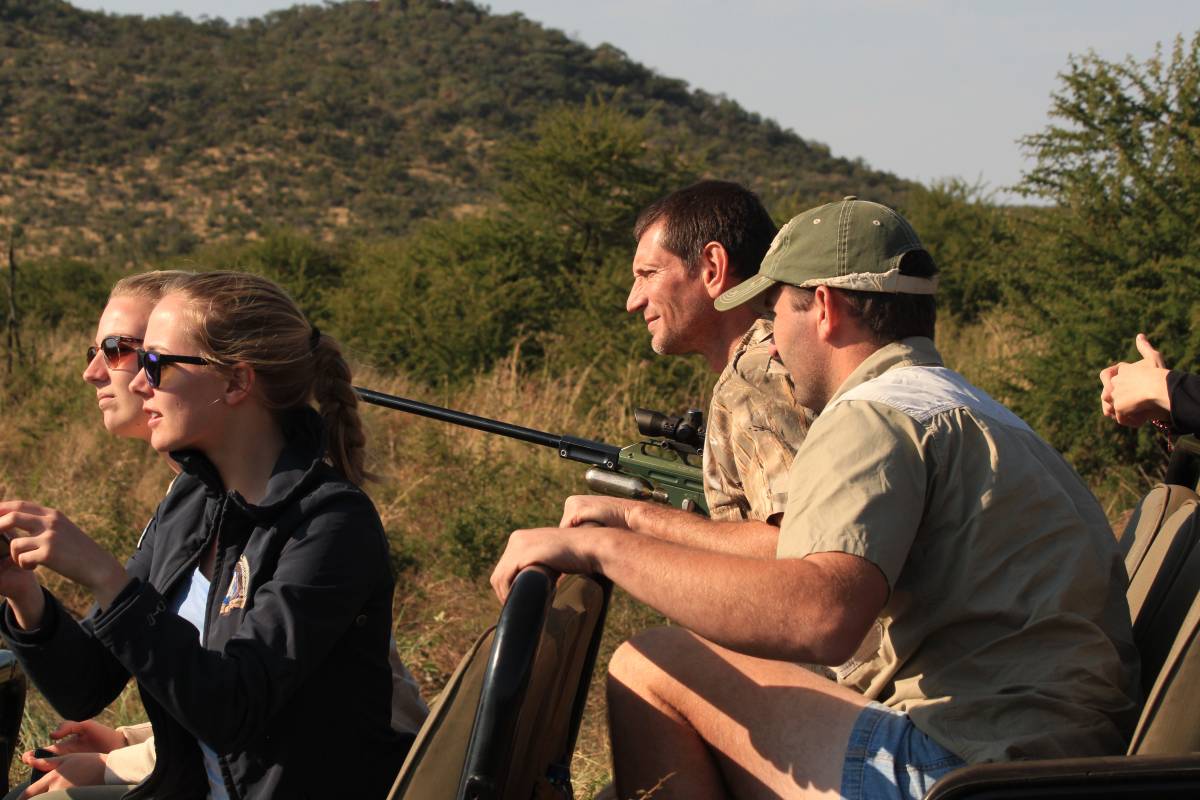 Waiting for the perfect moment 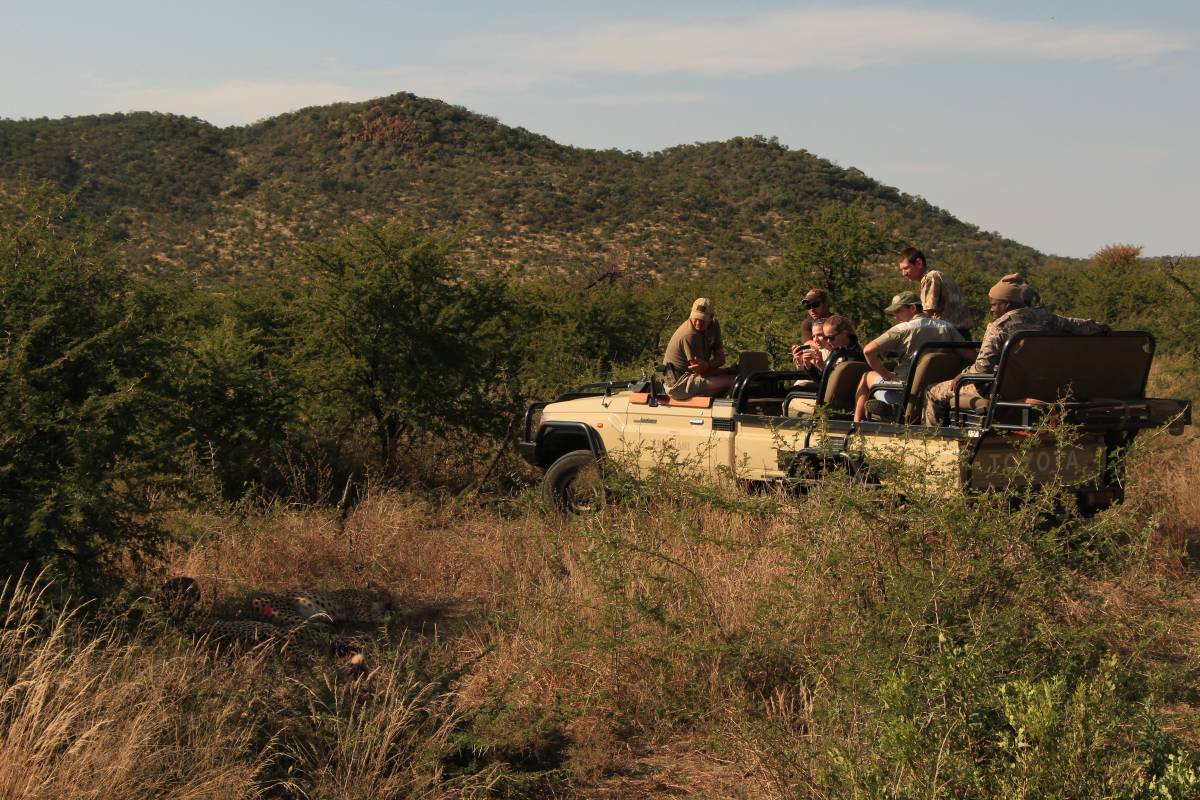 The cheetah has been darted successfully 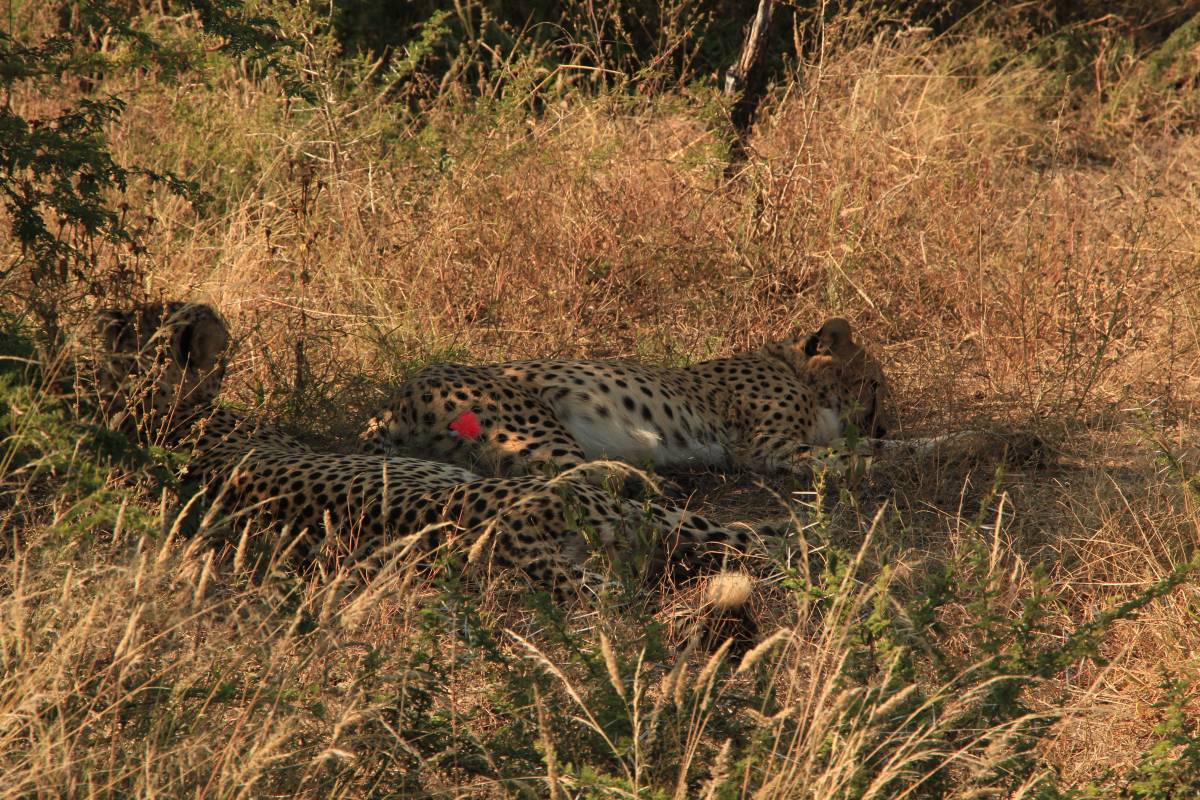 The dart was placed perfectly

It was a cool morning on this Thursday 11 May 2017. But the game drive of our Rhulani guests should become an unforgettable experience with the rising sun.

On the “To Do List” of the Conservation Department, the removal of a cheetah collar was at the top. Rhulani had made funds available and was the sponsor for this activity.

Rare or threatened animals are often equipped with a satellite collar so that the protection can be increased and the movements of the animal can be followed. This was the case with this cheetah male. But the battery had gone flat.

Rhulani's Ranger Riaan got up before sunrise to locate together with other guides the beautiful cat. He quickly found it in the north-west angle of the reserve. The cheetah rested together with its brother under a bush. Riaan kept watch for hours, not losing sight of the animal, until the ecologists, the vet and our vehicle with Rhulani’s guests arrived.

Philip Hattingh, Manager of the Honorary Officers Counter Poaching Unit in the reserve, gave interesting background information on the importance of conservation, and especially about the cheetah situation. There are currently five cheetahs in the park, and all of them are males: the two brothers here, known as the "Sable Ranch Coalition", then the Phinda Coalition, and another one moving alone.

Our guests witnessed how the cheetah got anesthetized by a dart from the vehicle. Shortly after, various examinations were performed with the sleeping cat, and where everyone got actively involved. Finally, the collar was removed.

“A huge thank you to the guides in the west that found them and stuck with the cheetahs till we got there. Appreciate it!”, wrote Hattingh after the successful operation.

The cheetah woke up, and the brother joined him again. A heartbreaking scene, and a wonderful conclusion of a special activity on a sunny morning.

Rhulani is actively involved in conservation activities. In particular, we support the project to introduce a female cheetah in the reserve, aiming to build a stable cheetah population in Madikwe. 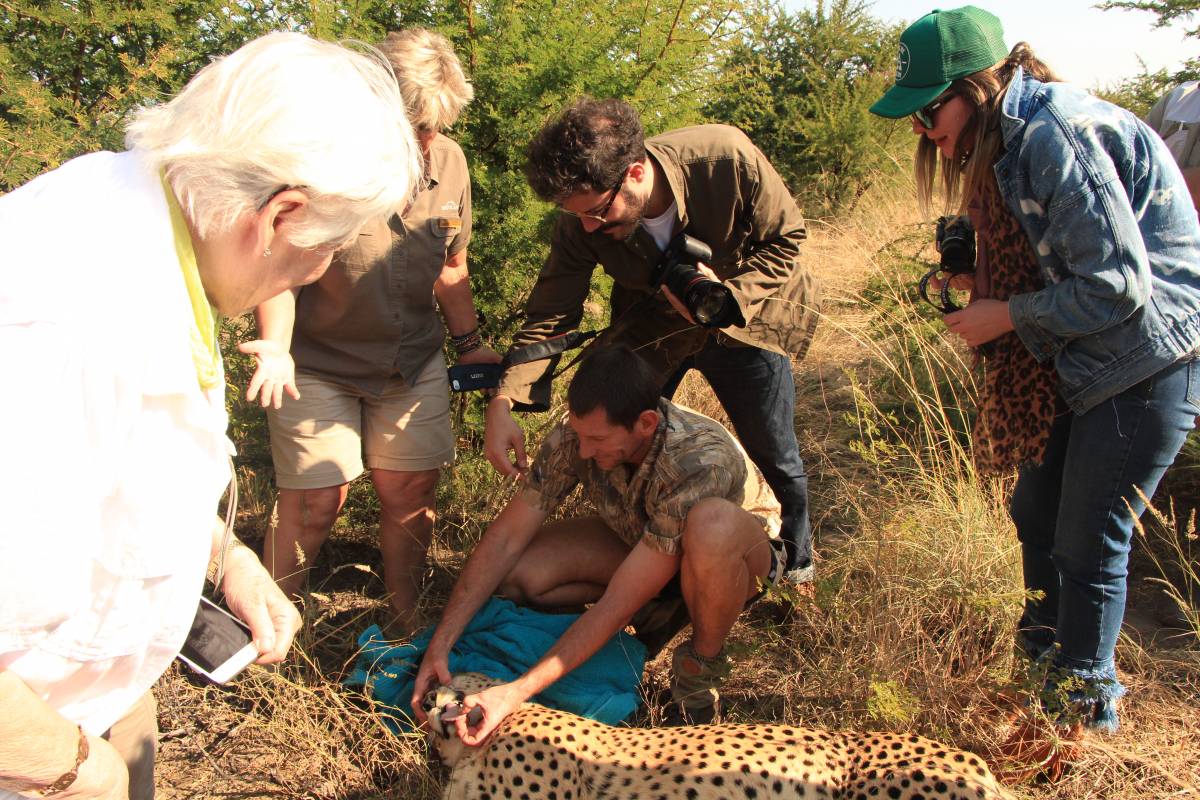 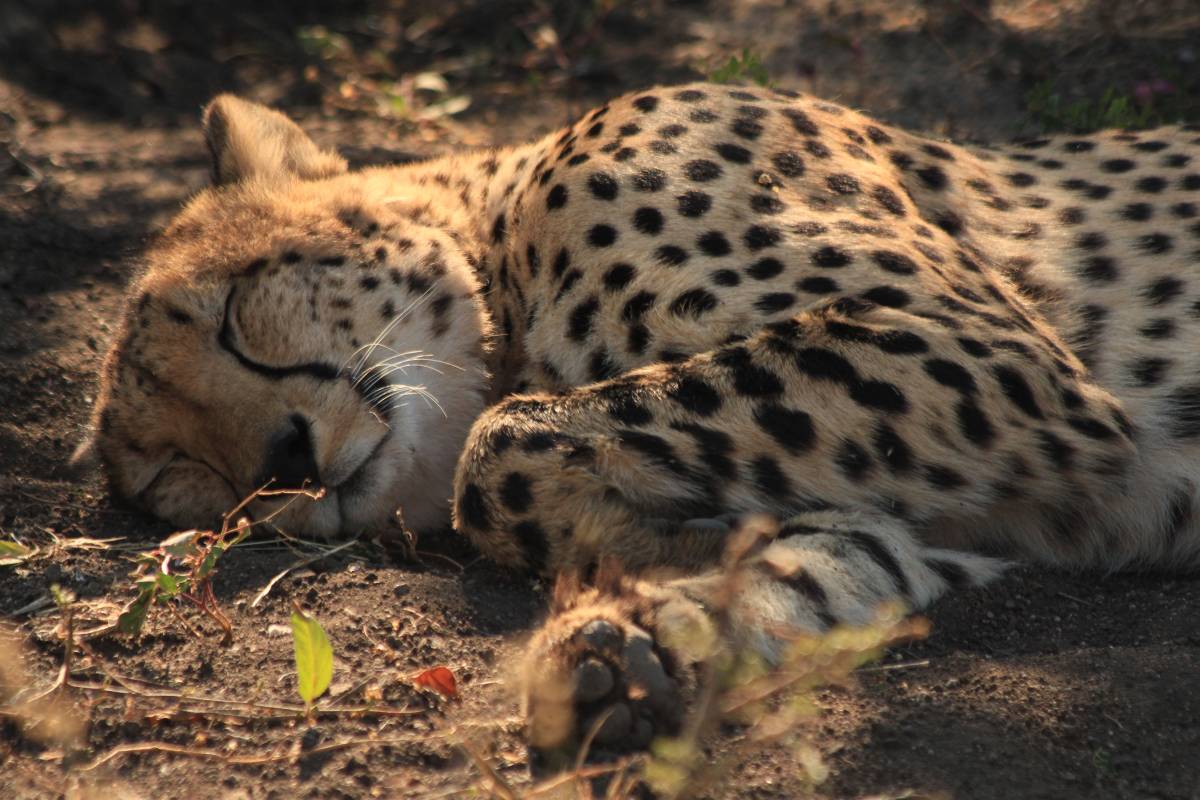 The Sable Ranch cheetah sleeping under a bush 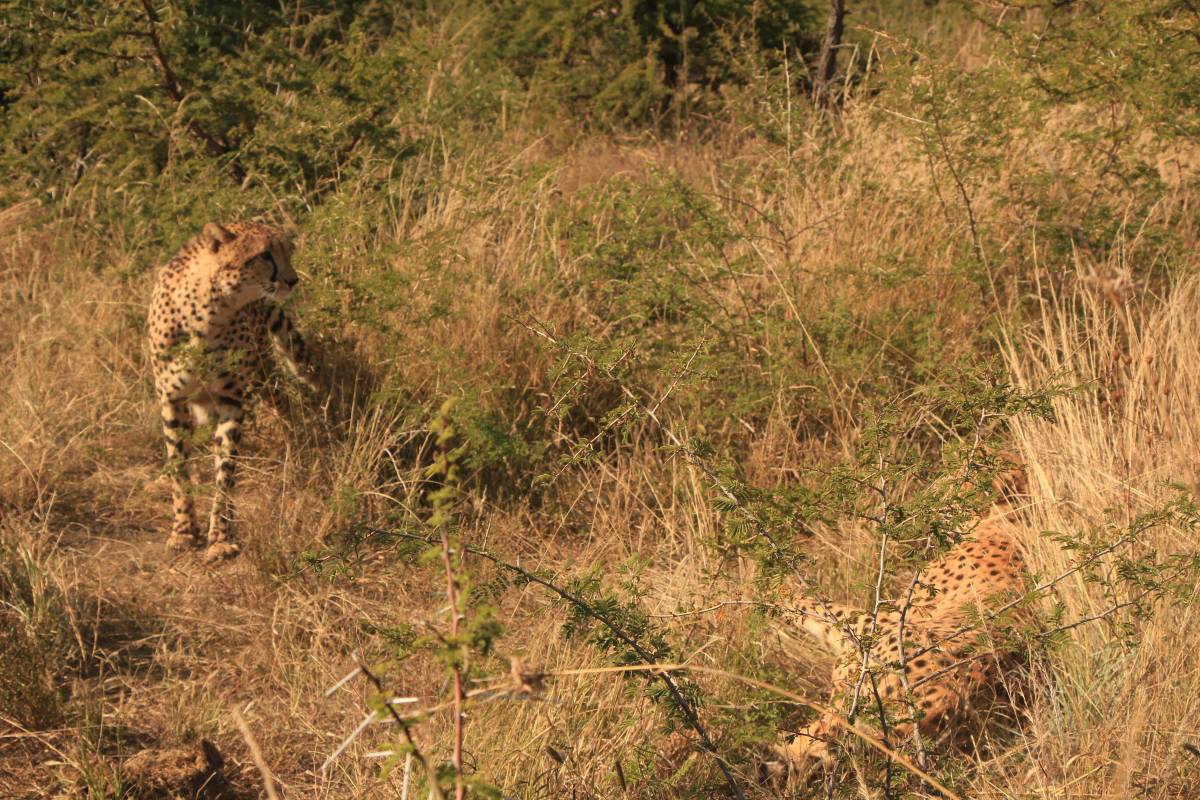 At the end, the two cheetah brothers joined again