Sometimes at Rhulani Safari Lodge we receive guests who want to support a meaningful conservation activity while spending a unique day. Read John Pickering's experience report when they went out to re-collar two Cheetahs. Thank you very much, John, for the great support!

“Normally when we want to give our friends and relatives an experience they will never forget I ask Rolf at Rhulani if we can sponsor a Rhino notching, but this visit we wanted to help Sam the Ecologist at Purple Rain keep an eye on her two Male Cheetahs, Thumelo and Thanda that have been known to take an excursion from Purple Rain into Madikwe causing great concern for Sam and her team. Sam told us that Thumelo’s Tracking collar was getting close to losing its battery power so we decided to sponsor a new Tracking Collar for him and let Sam and her team sleep better at night. 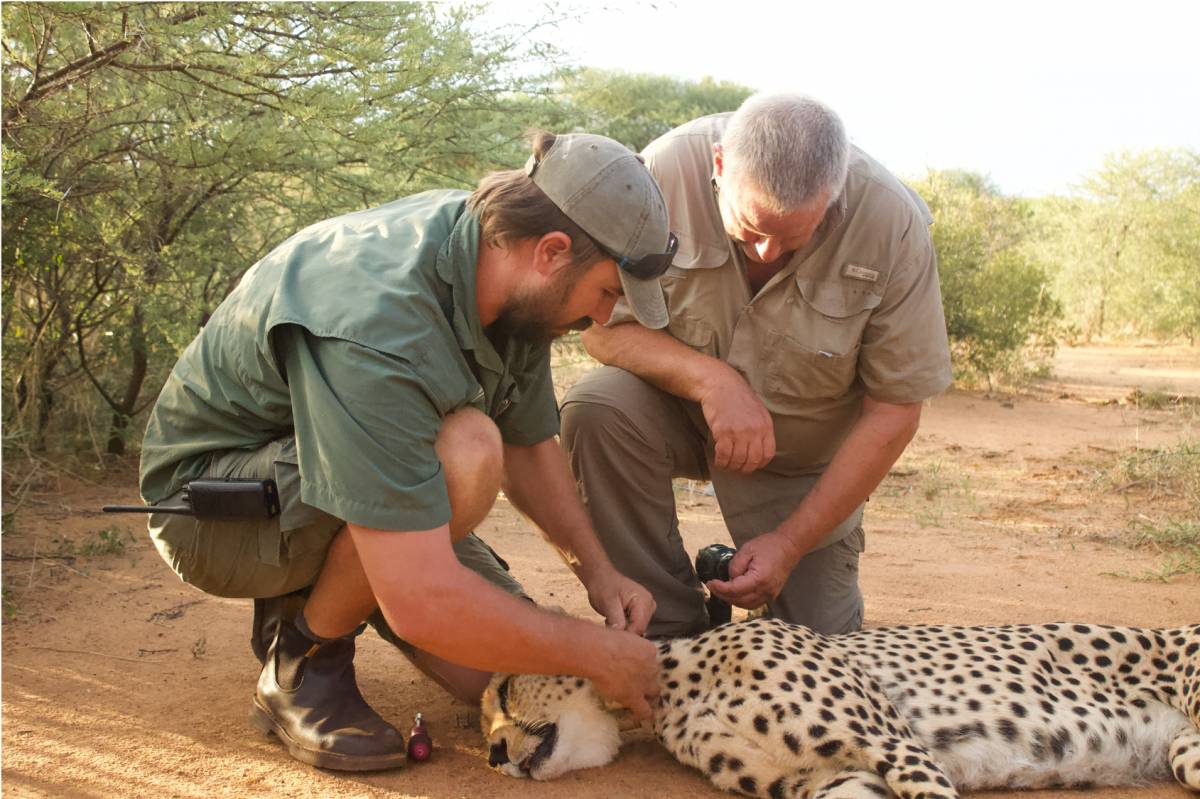 The cheetah gets the new collar 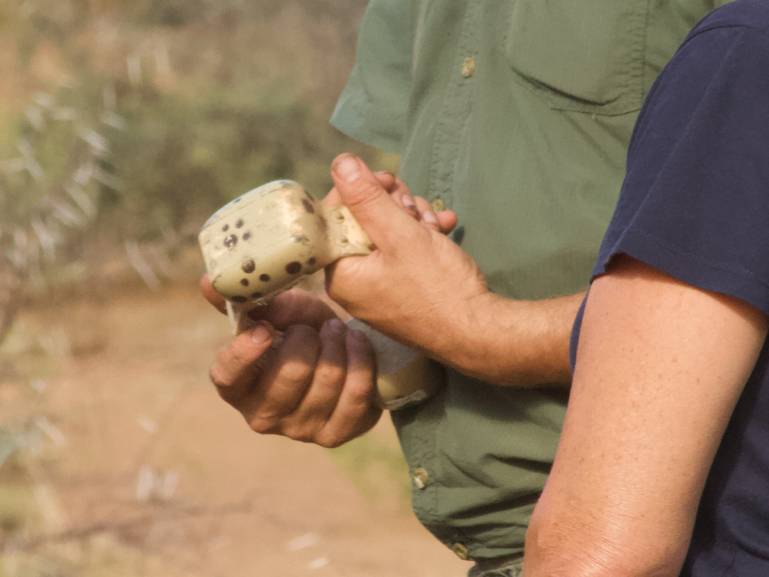 The new collar is ready

Usually we wake up at Rhulani at 5am for our early morning game drive or even earlier if we are going to notch a Rhino, however this time we had a leisurely breakfast at Rhulani before leaving for Purple rain at 11 o’clock, this is the first time in many visits to Rhulani that I had not been on the road tracking and spotting wildlife at 5:30am or earlier.

At Rhulani we met an interesting English couple Robert and Larraine who had been staying at the Lodge for over a week, we suggested to our Ranger Sean that it would be great if they could also join us. Robert said yes immediately, his wife Larraine however suffered from a very serious back issue and was not able to endure the rough tracks of Madikwe in Rhulani’s game viewing vehicle, however as usual the Rhulani team came up with an answer to this and transported Larraine in a much more comfortable vehicle on less bumpy roads to Purple Rain.

On arrival at Purple Rain we were met by Sam, Debbie and Dave. Debbie and Dave had put together a mouth-watering lunch. I am not so keen on Game meat but I must say the Barbequed Kudu was undoubtedly the tastiest red meat I have ever had. 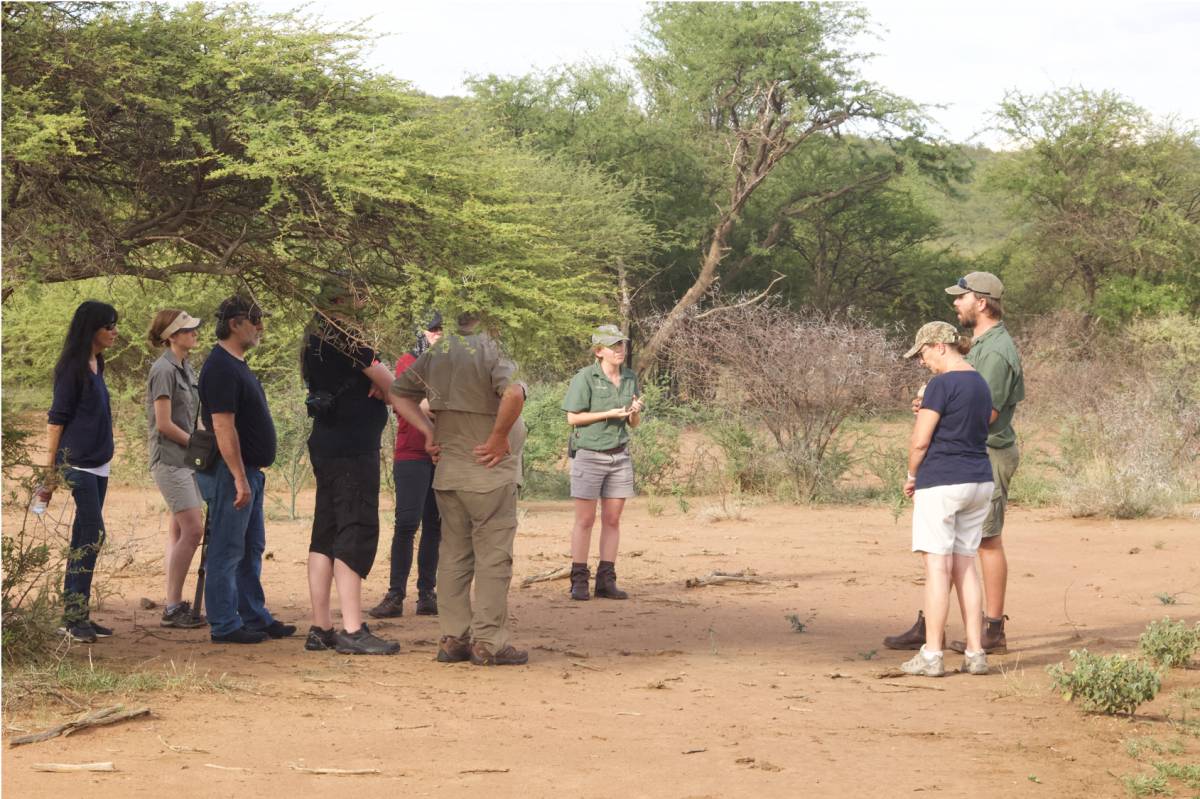 Short briefing to the guests about the re-collaring process

After gorging ourselves on the fantastic spread we set off to find the two Cheetahs. You would think that finding a Collared Cheetah in the Bush using a Radio tracking device would be easy, well it wasn’t. The two Cheetahs had decided that a walk of a few kilometres was in order so when we arrived at their last known position of course they weren’t there.

Whilst the trackers went off to search for the two, Lammert, Sam’s husband, gave us an interesting insight as to how he managed to get these two Cheetahs from different areas in South Africa to bond. It took him six weeks and a lot of patience. Then David, I guess one of the best Wildlife Vets around, gave us an insight into the various drugs he would use to anaesthetize Thumelo. And then after we replaced the collar bring him around again, the drugs he uses for Cheetahs are completely different from those they use when they notch Rhinos so this was very interesting.”

After approximately one hour Lammert got a signal for the Cheetah’s collar he had moved several Kilometers to an area near where Sam and he live. As we arrived Thanda decided it was time to exit stage left, Thumelo on the other hand was not so quick to move off. A few weeks earlier David had worked on Thumelo as he had large gash in his lower jaw, maybe Thumelo thought David was there to check all was well with the repairs he had made. David’s dart met its target and we followed Thumelo into the thick bush until he finally succumbed to the anaesthetic. 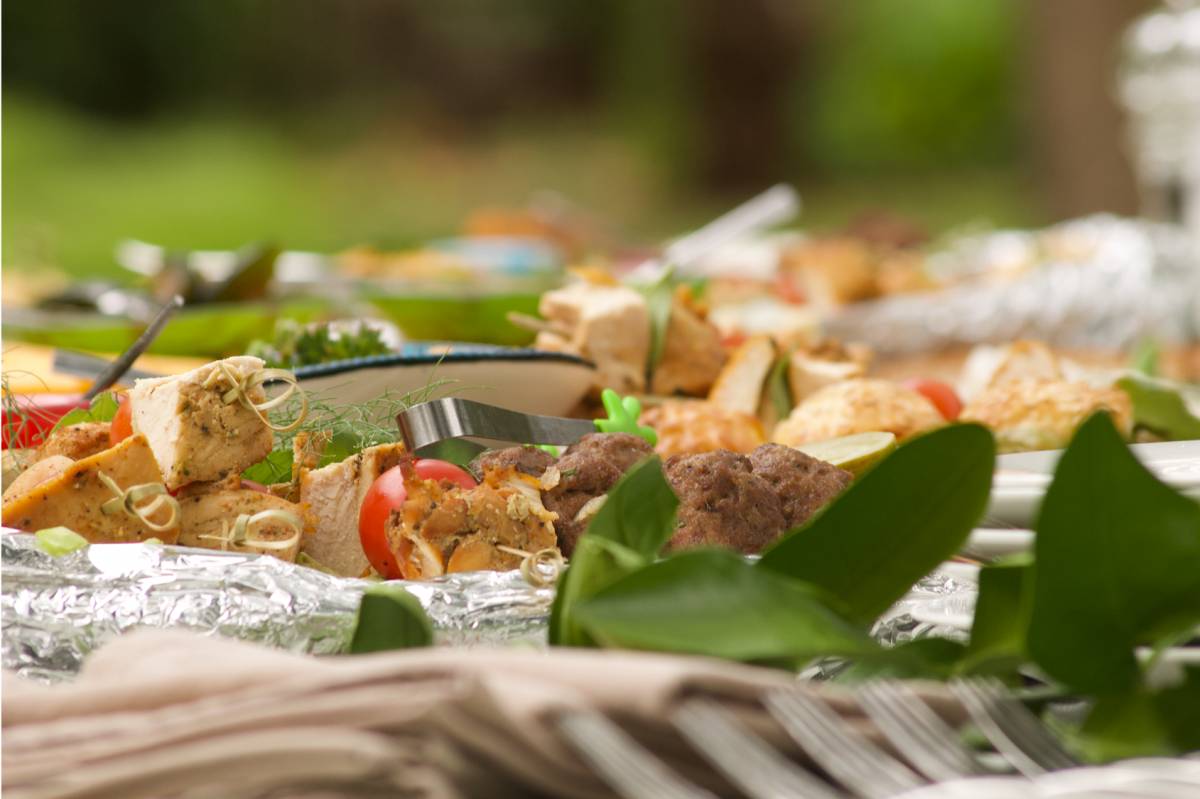 A delicious lunch is prepared!

Lammert and David checked that Thumelo was indeed ‘under the influence’ and then moved him to a more shady area were we could remove the old collar and mount the new one. Checking that all was well with the new collar and his chin David then administered the antidote and we waited a minute or two until Thumelo rose to his feet and started calling for his friend Thanda, who unbeknown to us was the whole time just a few meters away keeping an eye on his best buddy.

It was now getting late in the afternoon and we said our good byes to Sam and her team and drove back to Rhulani enjoying some of the Antelope that roam the plains of Purple Rain. It was already dark as we drove through Madikwe and as luck would have it we spotted some Springhare and an Aardwolf which we had never seen before, so another two boxes ticked on our Rhulani check list.

From our amazing experience we learnt that the Tracking collars are quite expensive, even those that have been refurbished, so the challenge to the Techies amongst Rhulani readers is to develop a robust, animal friendly Tracking collar that is more affordable and has a longer battery life than 18 months and of course most importantly it must be environmentally friendly."